July is usually the time when we reach the crescendo that is Camp Quest Minnesota. As I type this, campers from the second week’s session are having lunch in the dining hall and preparing for a final afternoon of activities before the last campfire commences tonight. Tomorrow their parents will pick them up and they will go home with a range of experiences under their belts.

Laura has attended CQMN since its inception–9 summers all told–and this was going to be her first time sitting it out. It would have been my 4th year as a counselor, and is the 10th anniversary for the organization. But when Isaac jumped the gun I had to wish our fellow volunteers well and experience camp vicariously from the sidelines. Best laid plans, eh?

It sounds like everyone at camp last week was excited to hear of Isaac’s early birth. We got a special delivery from veteran board member Norm last Sunday night on behalf of our hardworking fellow counselors. He delivered a couple 2013 camp shirts (designed by the good man Andrew Schatz) and noted that he had never seen a baby so small in real life. Heh. Isaac’s shirt will take some growing into, but we decided he should sport it for a bit anyway: 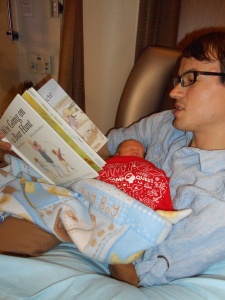 We also thought it would be a good time to read him his first book, and found this excellent pop-up version of We’re Going On A Bear Hunt. It caught my eye because that is also one of our call-and-response-style camp songs. Even though Isaac was snoozing during the reading session, we know he enjoys hearing our voices and we ourselves wanted to get to the end of the bear hunt. He woke up after in a fit of crying and sneezing, and then promptly fell asleep again when we put him back in his bed. Then he woke up again to look around. These kids do not respect patterns, do they?

So not only is the book super fun, but just inside the cover I noticed these dedications:

Yep! Between this coincidence and finding the Isaac Staples Sawmill antiques store in Stillwater on Laura’s birthday weekend, we think the name fits. Laura will post more updates soon. The guy is looking snazzy and has come a long way. Bye for now.

One thought on “Happy Camper”