This is the term Isaac has been given to describe his stay here in the Special Care Nursery. Basically, he’s doing well in all other areas (he is regulating his temp without the aid of the bed warmer, his breathing is getting better every day, and his IV is OUT due to getting enough nutrients from my breast milk). However, preemie babies don’t really “get” the suck-swallow-breathe coordination until around 34 weeks old which is quickly approaching.

The next step for Isaac (and the last before he comes home) is learning how to eat without a tube. This can be done either by breastfeeding, bottle feeding with my milk, or a combination of both. The nurse I talked to today said they don’t typically introduce the bottle until 35 weeks old if the mother is trying to breastfeed, but I did some research on my own and found that exclusively breastfeeding takes several weeks to nail down whereas bottle feeding takes only a week or two typically. And since he needs to take all 8 feedings of the day by some kind of nipple, this would mean a super long hospital stay. I would like to get him out of the hospital ASAP! So, I am going to push for the bottle this Friday when he is officially 34 weeks. Not going to give up on breastfeeding though! I will keep trying until he’s got it even if it takes months.

As for the “grower” part–he just needs to keep putting on the ounces! There is no actual weight requirement for his discharge (and he is already a decent weight in preemie standards anyway), but they do need to see that he’s digesting his food and gaining from the increasing volumes of his feedings. Walking into his room in the morning is always a favorite part of the day because they weigh him at midnight then write his weight change on the board. As of this morning he is 2.05kg which is 4lb and 8oz. Grow, little man, grow! We need him to eventually get bigger than this bear Grandpa Stuart got him…

Isaac had some surprise visitors on Monday! Gma Rita came back up from Iowa with Isaac’s uncle Brady in tow. Brady is the first uncle to visit and by far traveled the most distance–all the way from Phoenix, AZ. He happened to be in Iowa visiting for a high school reunion and got a chance to travel up to Minneapolis to see his nephew. His son, Talon, is 11 months old and we can’t wait for the two cousins to meet for the first time! If only Brady, his girlfriend Maribel, and Talon would quit the Southwest heat and settle up in the chilly Midwest… 😉 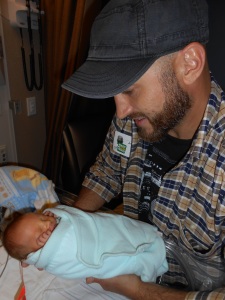 Finally, tonight we watched Isaac have his first bath. The nurse was quick and efficient and he only put up a little bit of a fight. We get to bathe him ourselves on Sunday, which will be one more thing to check off our educational list during his stay. When he’s all dry and cozy, he gets wrapped in a little Halo swaddle sack like so:

4 thoughts on “Feeder and Grower”